Born in the small village of Pankraz in Sudetenland (now Jitrava in the Czech Republic), part of the vast and powerful Austro-Hungarian Empire, François Linke was the second son of eleven siblings. His father was a subsistence farmer, the poor relation amongst a village full of cousins, most of who had trades that allowed them a better standard of living than Linke’s father Anton could ever hope to provide.
François, christened Franz, was apprenticed to a local cabinetmaker at the age of thirteen, travelled as a journeyman throughout the German-speaking world and eventually set his sights on Paris, the world centre for the arts.
My book François Linke 1855-1946 The Belle Epoque of French Furniture traces his early life through to his success in Paris at the Paris Universal Exhibition of 1900.

1868 – 1873 – Apprenticeship
1873 – 1878 – Travelled Europe as a journeyman
1875 – First visit to Paris
1878 – Settled in Paris, worked with ‘German masters’
1881 – first lease on the workshops that he occupied until his death
1881 – Married: 19th May – Julie Teutsch
(four children: Caroline: 1882, François 1884, Henriette 1894, and Charles 1897). His two sons pre-deceased him
1889 – Granted the right to reside permanently in France
1894 – Became a naturalised Frenchman
1900 – Reputation firmly established at the Exposition Universelle de Paris
1903 – Opened prestigious showrooms in the Place Vendôme
1906 – Awarded Frances’ highest accolade the Chevalier de l’Ordre de la Légion d’Honneur
Continued his exceptional international career until the German Occupation of Paris in 1940.
At the venerable age of seventy supplying over 1,000 pieces of furniture to King Fuad of Egypt. 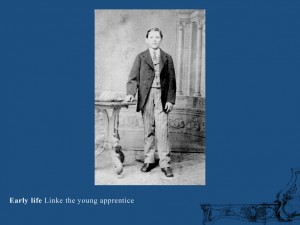